DayTodayGK has prepared the list of major Local Winds Around The World.

Wind is nothing but the flow of gases on a large scale. On Earth surface, wind consists of the bulk movement of air.  Winds are commonly classified by their spatial scale, their speed, the types of forces that cause them, the regions in which they occur, and their effect. Long-duration winds have various names associated with their average strength, such as breeze, gale, storm, and hurricane. 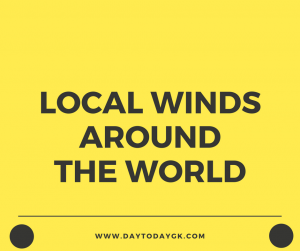 Local Winds Around The World