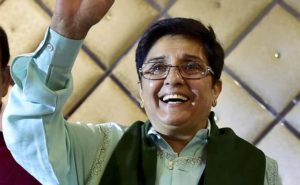 Former top cop and senior BJP leader Kiran Bedi has been appointed as the Lieutenant Governor of Puducherry, where the Congress won the assembly elections. She replaces Lieutenant-General AK Singh — who as the Lieutenant Governor of Andaman and Nicobar, was given additional charge of Puducherry in 2014. Ms Bedi had joined the BJP in January last year, following which she was projected as the party’s Chief Ministerial candidate in the Delhi assembly elections. But her candidature was cited as one of the reasons why the BJP lost Delhi to Arvind Kejriwal’s Aam Aadmi Party.

The country’s first woman IPS officer, who served for 35 years before joining politics, Ms Bedi said she had considerable exposure to the office during her stint as the secretary to Delhi’s former Lieutenant Governor Tejinder Khanna in 1998-99.

A sports lover and an author, Bedi is a recipient of Ramon Magsaysay Award as well as UN Medal for outstanding service. She was one of the pioneers of anti-corruption crusade in 2011 along with Anna Hazare and Kejriwal against the then UPA government. She also earned a law degree at Delhi University in 1988 and a PhD from IIT Delhi’s Department of Social Sciences in 1993.

Bedi joined the administrative services in 1972 and become the first female IPS officer in India. She has held various other posts such as deputy director general (narcotics) in the Narcotics Control Bureau, inspector general prisons of Tihar and deputy commissioner of Police West and North Delhi.