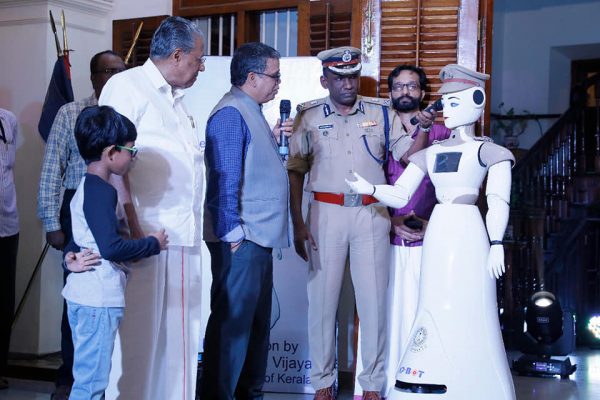 CM Pinarayi Vijayan inaugurated the humanoid police robot at the police headquarters in the state capital. It has become the first police department in the country to use a robot for police work. Chief Minister Vijayan welcomed the Sub Inspector (SI)-ranked robot into the service with an honorary salute and the ‘RoboCop‘ responded with a perfect salute. The KP-Bot will be deployed to perform duties of the front office of the police headquarters which means that it will receive visitors and direct them to different places as and when required.

The visitors can directly interact with the SI-ranked KP-Bot. The robot is equipped with facilities to fix appointment with officers, provide them with identity cards and also open new files based on their grievances. Just like other police officers, the RoboCop is capable of identifying higher officials and greet them with a salute.

Its duties would include identifying and guiding a visitor to the concerned department. It would also enquire about the details of the visitors and record their complaints. There are plans to update the RoboCop with more features like face recognition and explosive detection.