Mission Indradhanush was launched by the government to revamp the functioning of Public Sector Banks. The Government announced Indradhanush for Indian PS Banks in the eve of Independence Day 2015. To revive the fortunes of public sector banks, government unveiled a seven-point plan encompassing Rs 20,000 crore immediate fund infusion, creation of a single holding company and minimizing political interference. These reforms/points are called big thing in Indian Banking System since nationalization. 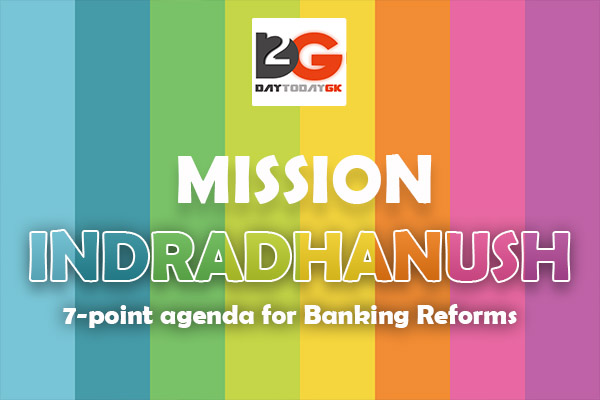 Indradhanush mainly focuses on systemic changes in state-run lenders, including a fresh look at hiring, a comprehensive plan to de-stress bloated lenders, capital infusion, accountability incentives with higher rewards including stock options and cleaning up governance.

The 7 points of Mission Indradhanush include:

APPOINTMENTS:  Under the new process of selection for MD & CEO, even Private sector candidates were also allowed to apply for the position of MD & CEO of the five top banks i.e. Punjab National Bank, Bank of Baroda, Bank of India, IDBI Bank and Canara Bank. Three stage screening was done for the MD’s position culminating into final interview by three different panels.

Executives from the private sector have been hired to run state-owned banks. Separate post of CMDs and MD & CEO in PSU. Private sector candidates can also apply for the position of MD & CEO.

BANK BOARD BUREAU:  The announcement for Bank Board Bureau (BBB) was made in Budget speech for the year 2015-16. BBB will be a body of eminent professionals and officials, which will replace the Appointments Board for appointment of Whole-time Directors as well as non-Executive Chairman of PSBs. It will replace existing appointments board.

BBB will comprise of a Chairman and six more members of which three will be officials and three experts (of which two would necessarily be from the banking sector).

The Search Committee for members of the BBB would comprise of the:

Out of the total requirement, the Government of India proposes to make available Rs.70,000 crores out of budgetary allocations for four years as per the figures given below:

DE-STRESSING:    The infrastructure sector and core sector have been the major recipient of PSBs’ funding during the past decades. But due to several factors, projects are increasingly stalled/stressed thus leading to NPA burden on banks. In a recent review, problems causing stress in the power, steel and road sectors were examined.

It was observed that the major reasons affecting these projects were delay in obtaining permits / approvals from various governmental and regulatory agencies, and land acquisition, delaying Commercial Operation Date (COD); lack of availability of fuel, both coal and gas; cancellation of coal blocks; closure of Iron Ore mines affecting project viability; lack of transmission capacity; limited off-take of power by Discoms given their reducing purchasing capacity; funding gap faced by limited capacity of promoters to raise additional equity and reluctance on part of banks to increase their exposure given the high leverage ratio; inability of banks to restructure projects even when found viable due to regulatory constraints.

The focus will be on de-stressing the banks from their Non-Performing Assets or Bad Loans. Asset reconstruction companies would also be strengthened to deal with the bad loan situation.

EMPOWERMENT:   The Government has issued a circular that there will be no interference from Government and Banks are encouraged to take their decision independently keeping the commercial interest of the organisation in mind. Under Empowerment, The government will make it easier for PSBs to hire. The government is looking at introducing Employee Stock Ownership Plan (ESOPs) for the PSU bank managements.

FRAME WORK OF ACCOUNTABILITY:   The present system for the measurement of bank’s performance was a system called SoI – Statement of Intent.  Based on certain criteria decided by Ministry of Finance, the banks used to come up with their annual target figures which was discussed between the Ministry and banks and finalized.  The entire exercise took very long and sometimes the targets for banks used to be finalized only towards the end of the year which is not a desirable thing to do.

To remove this degradation, the government has announced a new framework of key performance indicators for state-run lenders to boost efficiency in functioning while assuring them of independence in decision making on purely commercial considerations.

GOVERNANCE REFORMS:  Gyan Sangam, a meeting which was attended by PSBs and FIs at the begining of 2015 was the actual start of “Governance Reforms”. It’s main focus is on: