INFLATION
For a layman, inflation is just a price rise. In Economic terms, INFLATION is just a rise in general level of prices of goods and services in an economy over a period of time.

Inflation results in,loss of value of money (too much money chasing few goods). Another mean is that PURCHASING POWER of money decreases.
Or we can also say that, if there is more money supply in the country, then it increases demand of the people. As a result, price increases and causes inflation.

To control the situation of inflation in the country, then the money supply should be decreased (disinflation).

We generally say that, in case today the price of onion is 40 Rp. Per kg and next week they increase to 80 rp. Per kg, we used to say that, inflation has increased (mehangai badh gayi). The reality is different, in reality actually we don’t calculate INFLATION by seeing price hike in one product only, that’s why definition it is being said that the rise in “general level of prices of goods and services”, every product under the goods and services category will be taken into consideration and their aggregate price will be calculated and compared according to the previous one, and that’s how inflation/deflation data is being released.

When general level of prices is falling over a period of time, it is called DEFLATION, it is just the opposite of inflation and sometimes also known by word DISINFLATION.
But in economics, deflation or disinflation not used to indicate fall in prices, instead a price rise is termed as “rise in inflation” and a price fall is termed as “fall in inflation”.

Demand Pull Inflation
In this case, the inflation occurs due to the imbalance between the demand and supply, i.e. when when aggregate demand strongly outweighs the aggregate supply.

Cost Push Inflation
In this case, the inflation occurs due to the increase in prices of inputs like labour, raw material, etc. The increased price of the factors of production leads to a decreased supply of goods.

ANOTHER CLASSIFICATION OF INFLATION

SLOW INFLATION , also called creeping inflation. This kind of inflation is slow and on predictable lines which might be called small or gradual. Low inflation takes place in a longer period and the range of increase is usually in ‘single digit’.

BOTTLENECK INFLATION
This inflation takes place when supply falls drastically and the demand remains at same level. This could be put in ‘demand-pull inflation’ strategy.

CORE INFLATION
This is based on the inclusion or exclusion of goods and services while calculating inflation. In India, it was first time used in the financial year 2000-01 when the government expressed that it was under control – it means the prices of manufactured goods was under control.

In western economies, food and energy are not the problems for the masses, while in India these two segments play the most vital role for them.

STAGFLATION
It is the situation where inflation and recession exists together.
Where the price increases, but employment decreases.
Where the rate of increasing prices is more than the rate of economic growth.

Inflation is BENEFICIAL for ???
# Development of the country.
# For rich people.
# For businessmen/ producers/ entrepreneurs.
# For saving account holders in the bank.
# For debtors/ borrowers.

How inflation can be measured ???
The rate of inflation in India is being measured by two indices: WPI and CPI

(goods and services) Number of items in WPI: 676

Types of CPI  Earlier there were 4 CPI:

now, there are only 3 CPI’s in India:

Out of both WPI and CPI, the main index of measuring inflation in India is CPI (combined) by the recommendations of Urjit R patel (deputy governor of RBI) from 1st April, 2014 ownwards. 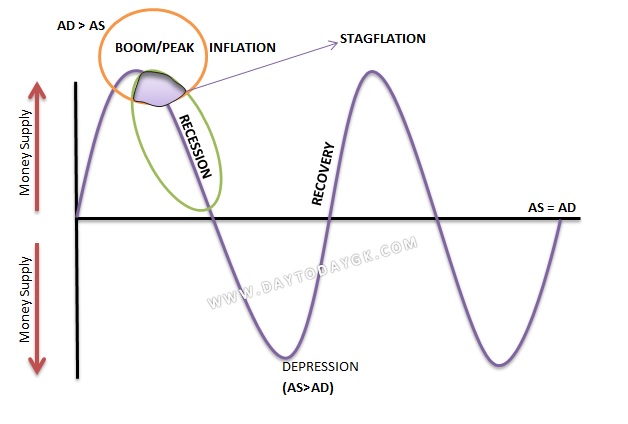