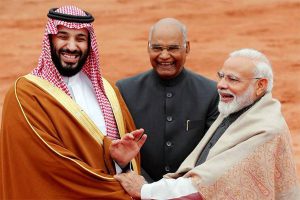 Saudi Arabia’s Crown Prince Mohammed bin Salman, who is also the Gulf nation’s defence minister, arrived in India on his first official visit and was welcomed by Prime Minister Narendra Modi. A Memorandum of Understanding (MoU) was signed on investing in the National Investment and Infrastructure Fund between the Government of India and the Government of the Kingdom of Saudi Arabia.

Both the countries also signed an MoU in the field of tourism between the Ministry of Tourism and the Saudi Commission for Tourism and National Heritage. Among other MoUs, the two sides also inked an agreement for cooperation in the field of housing. An MoU was signed for cooperation on broadcasting between Prasar Bharati and Saudi Broadcasting Corporation (SBC) for exchange of audio visual programme.

Framework Cooperation Program between Invest India of the Republic of India and Saudi Arabian General Investment Authority of the Kingdom of Saudi Arabia on enhancing bilateral investment relations, was also agreed upon.