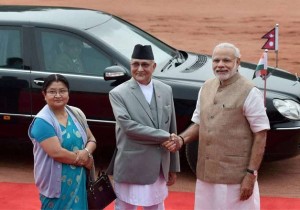 Indian Prime Minister Narendra Modi and Nepal Prime Minister KP Sharma Oli have jointly inaugurated a power transmission line from Muzaffarpur (India) to Dhalkebar (Nepal). This will provide 80 MW of power to Nepal with immediate effect. This will gradually reach its full capacity of granting 600 MW of power to Nepal by December 2017. Modi asked KPS Oli to adopt an “all inclusive” constitution in an “amicable” manner during their first ever bilateral talks. Both countries also signed seven agreements to strengthen economic ties.

Four sectors, i.e., housing, health, education and cultural heritage have been identified. In housing, US$ 100 million would be utilised for construction of 50,000 houses in 14 severely earthquake affected districts. US$ 50 million each would be utilised in health, education and cultural heritage sectors in 31 earthquake affected districts of Nepal.

This MoU will enable speedy implementation of remaining work on 17 Roads in Package 2, 3, 4, 5 and 6 of the Terai Road Phase-I project, totalling 518 kms. Two roads in Package 1 totalling 87 kms have already been completed.

This MoU aims to enhance relations between India and Nepal in the field of performing arts through exchanges of experts, exponents, dancers, scholars and intellectuals.

Letters of Exchange on Transit Routes

i) This Exchange of Letters between India and Nepal would result in simplification of modalities for traffic of goods between Nepal and Bangladesh while transiting through India, through the Kakarbhitta (Nepal) and Banglabandha (Bangladesh) corridor.

ii) This Exchange of Letters would provide for transit facilities for Nepal through the Vishakhapatnam port.

Letters of Exchange on Rail Transport

(i) This Exchange of Letters would allow for rail transport to and from Vishakhapatnam to Nepal.

(ii) This Exchange of Letters would help operationalise rail transit facility through Singabad in India for Nepal’s trade with and through Bangladesh.

The EPG comprises eight members with each country nominating four members, preferably a parliamentarian, a lawyer, an economist and a civil society activist. The EPG has now been constituted. Its mandate would be to comprehensively review bilateral relations and recommend measures including institutional frameworks to further enhance bilateral ties.