Nowadays in most of the Competitive Exams, questions related to Important Festivals around India as well as world are repeatedly appearing. You can download the same in PDF format at the bottom of this post. 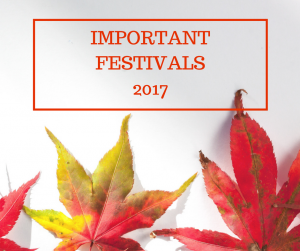 The fourth International Kite Festival began in New Delhi. Professional kite flying experts from across India and the globe are taking part in the three-day festival, which will have an exhibition on the history of kites as well.

A special kite making demonstration will also be organised where professional kite flyers will showcase their expertise and demonstrate the art of kite making.

The seventh edition of Hyderabad Literary Festival will be held from January 27-29, 2017 at the Hyderabad Public School (HPS), Begumpet.

Over 100 speakers have been invited and more than 130 events are planned. The guest nation for this year will be Philippines. Teresita C. Daza, the Phillippines ambassador to India is invited as the guest of honor for the inauguration.

The two-day annual camel festival began with much fanfare in the presence of foreigners and domestic tourists. District Collector Ved Prakash flagged off a procession from Junagarh which culminated at Karni Singh Stadium.

It was followed by fun activities including camel safaris. The festival, dedicated to the ship of the desert, will see camel dance, milking and fur cutting design competitions and camel races.

The UNESCO World Heritage Site Committee at Doha in Qatar granted the status to the park under the criteria of “exceptional natural beauty and conservation of biological diversity.”

All rituals were performed before Goddess Samaleswari, the presiding deity of the event.

Lohri festival is celebrated in Punjab

The festival of Lohri, celebrated with much joy and vigour in Punjab, marks the onset of the harvest season. The traditional bonfires not only keep away the winter chill, they are also used to make offerings to Gods before the harvest.

The fourth International Kite Festival began in New Delhi. Professional kite flying experts from across India and the globe are taking part in the three-day festival, which will have an exhibition on the history of kites as well.

A special kite making demonstration will also be organised where professional kite flyers will showcase their expertise and demonstrate the art of kite making.

The three-day long Brahmaputra Literary festival will begin in Guwahati. Human Resource Development Minister Prakash Javadekar will inaugurate the festival in presence of Chief Minister Sarbanand Sonowal and others.

The seventh edition of Hyderabad Literary Festival will be held from January 27-29, 2017 at the Hyderabad Public School (HPS), Begumpet.

Teresita C. Daza, the Phillippines ambassador to India is invited as the guest of honor for the inauguration.

The tenth edition of Sula Fest has begun on 03rd February 2017 at the Sula Vineyards in Nashik, Maharashtra.

The line-up for the three-day festival, which will also feature professional wine tastings and grape stomping, includes artists Infected Mushroom and Nucleya.

One of the most unique festivals is the Jaisalmer Desert Festival that will be held from February 8 to 10 this year.

It is held with Jaisalmer Fort in the backdrop and has a bunch of interesting competitions like the best moustache competition, turban-tying competition and even a Mr Desert pageant.

Thousands of people, dressed in their colourful attire, followed the procession carrying the palanquins of the local deities and marched to the Paddal mela ground from Madho Rai temple.

Around 200 devtas participated in the Jaleb from almost all corners of the district.

Uttarakhand Governor K K Paul has inaugurated the 29th edition of the InternationaI Yoga Festival at Rishikesh, and the event was growing in stature and helping the state become a sought-after destination for spiritual tourism.

The week-long event, jointly organised by the AYUSH ministry, Uttarakhand Tourism Development Board, Parmarth Niketan and Garhwal Mandal Vikas Nigam, was inaugurated at Parmarth Niketan along the banks of the Ganges River.

The biggest river festival of India, Namami Brahmaputra, begins in 21 districts of Assam. President Pranab Mukherjee will inaugurate the festival on the banks of the river, which is considered country’s only male river.

A sea of devotees, undeterred by the heavy downpour, thronged the town of Puri for the world famous annual Rath Yatra of Lord Jagannath and his siblings that began. Lakhs of people have congregated at the pilgrim town to witness Lord Jagannath, Lord Balabhadra and Devi Subhadra riding three giant wooden chariots to be pulled by the devotees on the Bada Danda (Grand Road) as they travel to Gundicha temple.

The Hornbill Festival began in the Naga Heritage village of Kisama. The festival coincides with the Statehood Day of Nagaland. It is tourism promotional extravaganza to revive, protect and preserve the richness and uniqueness of the Naga heritage. It is also called as the ‘Festival of Festivals‘.

Thousands of people have gathered in Verwada village in Barwani district to celebrate the newest festival in Madhya Pradesh – the festival of Rani Kajal Mata, an ancient, indigenous deity. The deity, a sacred rock, is the guardian goddess of the Pata tribe that resides in Barwani, the northernmost district of the Indian state of Madhya Pradesh, bordering Rajasthan.

Vat Savitri’ is a festival celebrated by married women who pray for the long life of their husbands and also so that they can marry the same husband for 7 more lifetimes. y a remarkable coincidence ‘Shani Jayanti’ and ‘Snaan Daan Amavasya’ also fall on the same day.

Guru Purnima also known as Vyasa Purnima falls in the month of Ashadh and will be celebrated on July 9 in 2017. On this day, students pay respect to their gurus and it’s celebrated on the birth anniversary of Veda Vyasa.

Thrissur Pooram​ is an annual Hindu festival dedicated to Lord Shiva. It is one of the most important and grand elephant festivals of Kerala that is held in Vadakkunnathan Temple situated in Thrissur. The festival’s idea was conceived by the Maharaja of Cochin Sakthan Thampuran, also known as Raja Rama Varma who organised the first Thrissur Pooram​ in 1798.

Many Chinese communities across Southeast Asia go vegetarian this week for the annual Taoist “Nine Emperor Gods” festival but few do it with quite the gusto and shock factor of Phuket’s inhabitants.