Home » election » Do You Know How President is Elected in India?

How President is Elected in India?

President is elected in India by an indirect method by an electoral college. Pranab Mukherjee is 13th and current President of India. His five year Presidential term is nearing its end. By July mid, India will get its 14th President.

We all know that Chief Ministers and Prime Minister are directly elected by people. But we are not casting any vote for the President election. So how President is Elected in India? What is the exact process behind this indirect method?

The election of the president has to be conducted before the present president’s term of office comes to an end. This is because the country should not be without a President even for a day.

What is the eligibility to become President?

Article 58 of the Constitution sets the principle qualifications one must meet to be eligible to the office of the President. A President must be:

Under Articles 56-57 of the Constitution of India, the President is eligible for re-election.

What are the Powers and Duties of the President?

How President is Elected in India?

Article 54 of the Constitution provides for an indirect method for the election of the President. He is elected by an electoral college consisting of elected members of both Houses of Union Parliament (Lok Sabha & Rajya Sabha) as well as of all State Legislative Assemblies. So both MPs and MLAs can cast their votes.

To win the election, the presidential candidate must poll above the 50% cut off as the first preference.

The nominated members of the Parliament and Legislative Assemblies have been denied a share in the Presidential election. Members of legislative councils in the states where there are bicameral legislatures can NOT participate in election of President.

In General Election, a single person’s vote is counted as one. But it’s not the same in Presidential Election.

Value of Vote of MLA & MP 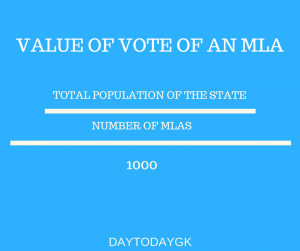 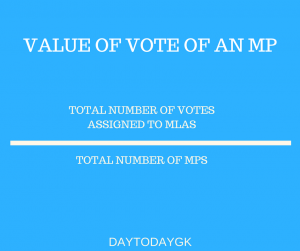 MPs represent the whole country they have more votes. MLAs have fewer votes than MPs as they represent only the people in their states. This is called “proportional representation”.

The votes polled (First Preference Votes) of each candidate are counted and calculations are done taking into account the value of each vote as stands determined on the basis of the formulas discussed above. 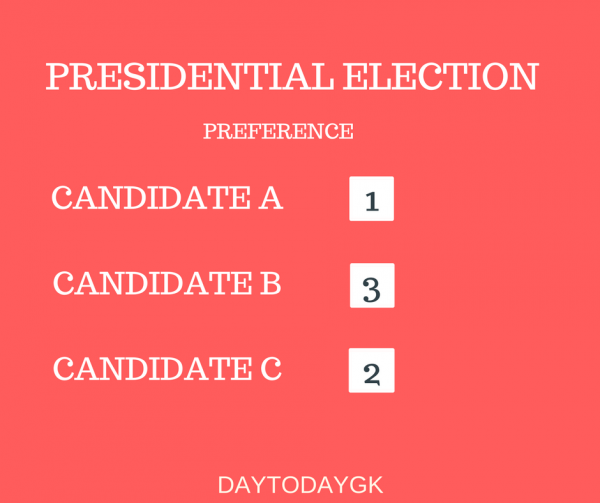 The total number of valid votes decide how many votes will a candidate need in order to be declared winner. This number is divided by two and added to one to form the benchmark of winning. For example, if there are 10,000 valid votes, then the candidate would require (10,000/2)+1, which is equal to 5,001 votes. If none of the candidates secure the benchmark, then following process is followed:

Let us assume a candidate needs 25001 votes to be declared as a winner. Out of four candidates, A, B, C, and D, the results of the first preference counting are:

In this case, candidate B will be eliminated and his votes will be distributed to the rest of the candidates on the basis of the second preference. Post this, suppose, A gets 3000 votes, C gets 2000 votes and D gets 3000 votes. The new results are:

Exceeding the vote quota, candidate C will be declared as the President of India.

This is how President is Elected in India.

Dispute in the Presidential election

Article 71 stipulates that all doubts arising out of election of the president will be decided by the “Supreme Court”.

ALSO CHECK OUT – COMPLETE LIST OF PRESIDENTS OF INDIA SINCE 1950

For the exercise of his constitutional rights and powers, the President is not answerable to any court. During his tenure, he cannot be arrested or detained and no criminal proceedings can be launched against him. For suing him in a civil case involving his personal acts, an advance notice of two months has to be given.

As per the Constitution of India, the country cannot be without a President even for a single day. In those rare circumstances, where both the President as well as the vice-president are unavailable, the Chief Justice of India takes over until subsequent election. Such a circumstance arose just once in 1969, when Mr M Hidayatullah, the Chief Justice of India took over as the President for a month.