Home » Nicotine » What happens to your body when you smoke?

Stressed out, bored or simply desperate to smoke – then smoking is usually a solution to all of these problems. But did you know that in order to beat that boredom you are slipping down the unending opening of death. Ask how? Here is what smoking does to your health and eventually causes cancer, right from when you light up to when you exhale. People do smoke without even knowing what it is made up of.

Each cigarette contains about 7,000 chemicals, many of which are poisonous and about 70 cause cancer. Some of the worst ones are:

Every time a person inhales smoke from a cigarette, small amounts of these chemicals get into their blood through the lungs. The chemicals are then transported by the blood to different parts of the body and cause harm.

Smoking is said to stimulate pleasing and enjoyable emotions, and smokers claim that it helps boost their mood, alleviates minor depression and small fits of anger, improves concentration and short-term memory, and can also provide a modest sense of well-being. This is because cigarettes contain the addictive substance nicotine that stimulates dopamine in the brain, which is responsible for the “pleasurable sensations.”

However, the more you smoke, the more your nerve cells become immune to the pleasure brought on by smoking. As a result, smokers tend to increase their intake of nicotine to get that desirable feeling from smoking. If you think smoking an e-cig makes a difference, it doesn’t. Researchers actually found that a brand of e-cigarette contains more than 10 times the level of carcinogen contained in a regular cigarette. Formaldehyde and acetaldehyde, both harmful toxins, were also found in the vapour produced by several types of e-cigarettes. 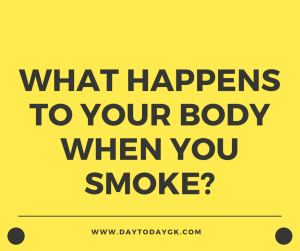 What happens to your body now??

Whether you light your cigarette using a matchstick or a lighter, the first puff is the most damaging. The smoke emitted from the match and the cigarette form a strong cocktail that can leave the mucous lining in your nose damaged. The heat from the cigarette affects the skin on your face and most importantly around your nose and mouth. The heat causes your lips to darken, leads to wrinkles and the appearance of age spots.

Smoke inside the mouth:

When the smoke is inside your mouth, the tar starts to coat the enamel of your teeth, discolouring them. Also damages the cells in and around your mouth, and in some cases leading to a change in their DNA – causing mutations. The tar and chemicals also coat the roof of your mouth, leading to a condition called the ‘smoker’s palate’ where the roof of your mouth gets coated with a whitish residue with small red spots protruding from it. These protrusions are actually the opening of ducts of glands present on the palate. Smoking also kills the good bacteria within your mouth, giving way to bad breath and a condition called oral thrush. It also leads to gum disease, discolours your gums – turning them black, leads to cavities and causes oral cancer. This oral damage would need to be examined by your Australian Dental Specialists, or another dental specialist closer to you. The internet might help you in searching for a good dentist near you, be it anywhere you reside. For example, if you are someone from Scarborough, Canada, a quick search on the internet by typing ‘dentist Scarborough‘ can give you an array of dentists to choose from, and visit one to get your teeth examined..

Once you start to inhale the smoke, it first hits the back of your mouth or the beginning of your throat, this place is packed with blood vessels that immediately contract. It also affects the mucous cells lining this part of your throat, eventually deadening them. This can lead to infections, excessive dryness and irritation.

One of the commonest complaints a smoker has is that they feel an itchy sensation at the back of their mouth. This is due to the irritation and dryness of this region. It also causes changes in one’s voice. Commonly seen as hoarseness of the voice, it is mainly because of the effect the chemicals have on the vocal chords. Another reason for this is the constant clearing of one’s throat, commonly seen in smokers. Smoking can also cause throat cancer.

Trachea is the pipe that leads to your lungs. It is lined with tiny hair like processes (called cilia) that help throw out any foreign objects. These cilia get damaged by the smoke of cigarettes and tend to function less optimally. It also leads to itchiness in the trachea leading to what is called the smoker’s cough.

Smoking affects your food pipe as well. The chemicals and heat from the smoke tend to affect your oesophageal sphincter muscle. This is the muscle responsible for keeping the contents and acids in your stomach from rising back up into your throat. The weakening of this muscle is one of the main reasons for GERD (Gastro oesophageal reflux disease), acidity, ulcers and other stomach ailments.

When it enters bronchus and alveoli:

This is where the cigarette smoke does the most damage, that is slow, progressive and deadly. Cigarette smoke attacks the cleaning mechanism of the respiratory system that is guided by cilia and mucous. The cilia moves the mucous that has trapped foreign object like dust, bacteria etc and throws it out of the body. In a smoker these cilia tend to get paralysed and eventually die. Smoking also causes an increase in the amount of mucous produced, and since the cilia can no more function and throw out the mucous, a person develops a smoker’s cough. The cells along the bronchi oles get damaged and tend to multiply abnormally.

These cells cause the hardening of the outer surface of the bronchi-oles and leads to lesser ability to exchange gas with the microscopic air sacs (called alveoli) present around them. Cigarette smoke also contains carbon monoxide. This is a potentially lethal gas since it attaches to the heme (iron) part of your blood and does not allow it to carry oxygen to other organs. Inhaling too much of this gas can kill you. In cigarette smoke carbon monoxide leads to lack of oxygen in the body, which eventually effects all your organs.

It not only sets off the roller coaster of events leading to cancer it also starts the process of eventual decay of your organs – starting from your mouth to your brain, kidneys, liver, digestive system and blood.

Can a person stop smoking if they’re addicted to cigarettes?

Many people don’t realize they are addicted to smoking. They think they can easily quit any time they want. But when they try, they forget it is extremely hard. Unfortunately, it is very easy to become addicted. Cigarettes are just as addictive as cocaine or heroin. Even if you only smoke one or two cigarettes a day and even if you’ve never bought a pack of cigarettes yourself, you are at risk. Stressful situations or hanging out with friends who smoke might cause a person to smoke more and become addicted. If you smoke, try going a whole week without smoking at all. If you find this challenge to be very hard, you are probably addicted to cigarettes. Some have successfully moved away from it by looking at alternatives similar to smok nord and other vaping products, for example, so they can ease off their addiction and move onto something else that could be better for them in their transition. Dry herb vaporizers are popular in this regard. You can read https://blog.vapefuse.com/know-before-buying-dry-herb-vaporizer/ to learn more about it.

When is the best time to quit smoking cigarettes?

A lot of people put off quitting smoking, thinking that they’ll do it when the time is right. Only 5% of teens think they will still be smoking in 5 years, but in reality, about 75% of them are still smoking more than five years later. If you smoke, it will never seem like the right time to quit – and quitting will never be easy. The longer you smoke, the harder it will be to stop, and the more damage you’ll do to your body.

Here are some reasons to quit sooner rather than later:

Most teens would rather date a non-smoker. You’ll save money if you quit smoking. More than thinking about the money your spending for cigarette think about your health. All you have is only one pair of lungs. Any damage you do to them now will be with you for the rest of your life. The longer you smoke, the greater your chances of dying from it. One out of 3 smokers die from smoking and many more become very sick. Think about your friends who smoke. 1/3 of them will die from smoking if none of you quit.

So, the next time you light up that cigarette, think about what your body goes through to support your habit.

World No Tobacco Day (WNTD) is observed around the world every year on May 31. It is intended to encourage a 24-hour period of abstinence from all forms of tobacco consumption around the globe.

In India every year on March 9, No Smoking Day is celebrated as an awareness program in almost all over the nation against tobacco consumption among the people. The main objective of the day is to spread awareness about the harmful health effects of tobacco consumption through cigarette and other modes. The utmost intention of the program is to help smokers to get rid from the habit of smoking.