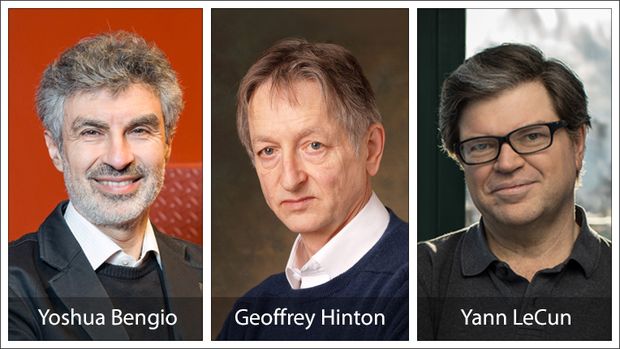 The 2018 Turing Award, known as the “Nobel Prize of computing,” has been given to a trio of researchers who laid the foundations for the current boom in artificial intelligence.

Yoshua Bengio, Geoffrey Hinton, and Yann LeCun — sometimes called the ‘godfathers of AI’ — have been recognized with the $1 million annual prize for their work developing the AI subfield of deep learning. The techniques the trio developed in the 1990s and 2000s enabled huge breakthroughs in tasks like computer vision and speech recognition. Their work underpins the current proliferation of AI technologies, from self-driving cars to automated medical diagnoses.

The Turing Award, which was introduced in 1966, is often called the Nobel Prize of computing, and it includes a $1 million prize, which the three scientists will share.

The award is named after Alan Turing, a British mathematician and reader in mathematics at the University of Manchester. Turing is often credited as being the key founder of theoretical computer science and artificial intelligence. From 2007 to 2013, the award was accompanied by an additional prize of US $250,000, with financial support provided by Intel and Google. Since 2014, the award has been accompanied by a prize of US $1 million, with financial support provided by Google.

The first recipient, in 1966, was Alan Perlis, of Carnegie Mellon University. The first female recipient was Frances E. Allen of IBM in 2006.