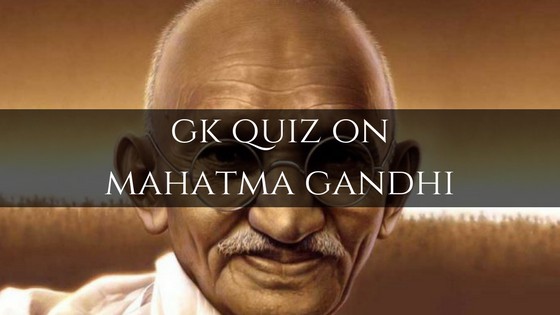 GK Quiz on Mahatma Gandhi – One of the major topics in General Knowledge. All the competitive exams which has History in it’s syllabus will have one or two questions related to our Father of Nation Mahatma Gandhi Ji.

1. Gandhiji’s “The Story of My Experiments with Truth” was originally written in Gujarati. The English translation was done by ______________.
a) Murali Krishnan
b) Mahadev Desai
c) Venkat Pakshiraj
d) Raj Parikh Gupta


Click here to View Answer
Answer b) Mahadev Desai. Mahadev Desai was an outstanding writer, at ease with Gujarati, Bengali and English. He was best remembered as Mahatma Gandhi’s personal secretary. The Indian Department of Posts published a commemorative stamp in his honour in 1983.


Click here to View Answer
Answer a) 1930. Mahatma Gandhi is the only Indian to be named TIME Person of the Year, having been given the honour in 1930. The magazine described him as ‘Saint Gandhi’ and later named him as one of the 25 Political Icons of all time. Gandhiji’s mark on world history in 1930 will undoubtedly loom the largest of all, wrote TIME.


Click here to View Answer
Answer b) 1942. The Quit India Movement or the India August Movement, was a movement launched at the Bombay session of the All-India Congress Committee by Mahatma Gandhi on 8 August 1942, during World War II, demanding an end to British Rule of India.


Click here to View Answer
Answer b) 1931. The Gandhi Irwin Pact was a political agreement signed by Mahatma Gandhi and the then Viceroy of India, Lord Irwin on 5 March 1931 before the second Round Table Conference in London.

8. On Gandhi’s suggestion’ which organization was formed in 1894 by the Indian community in South Africa?
a) National Indian Party
b) Natal Indian Congress
c) People’s Party
d) Congress for the People

9. In 1920, Gandhi returned ___________ medal to the Government as a gesture of non cooperation towards the British Government.
a) Nobel Prize
b) Chevalier Award
c) Kaiser-i-Hind
d) Faizal-Malik

11. Who commented “Mr Gandhi’s religious and moral views are’ I believe’ admirable’ but I confess that I find it difficult to understand the practice of them in politics.”?
a) Lord Erwin
b) Lord Reading
c) Lord Wellington
d) Lord Kristen

12. In May 1916′ Gandhi was invited to speak at laying of the foundation stone of which university?
a) Banaras Hindu University
b) Hyderabad University
c) Rani Lakshmi Bhai University
d) Swami Vivekananda University

13. At which railway station was Gandhi thrown out of the train on his way to Pretoria?
a) Pieter Maritzburg
b) Surrey
c) Ohio
d) Birmingham

14. Who gave the title “Mahatma” to Gandhi and referred to him as “Maharaj”?
a) Bala Gangadhar Tilak
b) Jawaharlal Nehru
c) Rabindranath Tagore
d) Subash Chandra Bose

15. The Champaran agitation is associated with which of the following plants?
a) Tea
b) Coffee
c) Indigo
d) Rubber


Click here to View Answer
Answer c) Indigo. The Champaran agitation in 1917 was the first major success of Gandhi after his arrival in India. The peasants of the area were forced by the British landlords to grow Indigo, which was a cash crop, but its demand had been declining. To make the matters worse, they were forced to sell their crops to the planters at a fixed price. The farmers turned to Gandhiji for help. Pursuing a strategy of nonviolent agitation, Gandhi took the administration by surprise and was successful in getting concessions from the authorities.