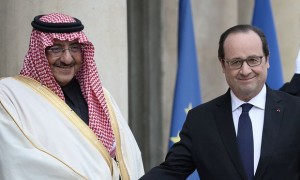 President Francois Hollande has awarded the Legion d’Honneur, France’s highest honour, to visiting Saudi crown prince Mohammed bin Nayef. The Crown Prince’s visit to the Elysee Palace actually took place on Friday 4 March, the same day as Mr Hollande held talks with Angela Merkel about how to cope with the refugee crisis. The French government was among the most vocal outside the Middle East in its condemnation of Saudi mass executions earlier this year, calling the kingdom’s killing of 47 people “deeply deplorable”.

The Legion of Honour was founded by Napoleon in 1802, and is regarded as among the first and most prestigious modern orders of merit in the world. In both France and the UK, there was anger at the decision to award the symbolically significant medal to the deputy leader of a country which has executed 70 people since the start of the year.

On January 2, 47 were executed for “terrorism”, including Shiite cleric Nimr al-Nimr, a driving force behind protests that began in 2011 among the kingdom’s minority Shiites. Most people sentenced to death in Saudi Arabia are beheaded with a sword.