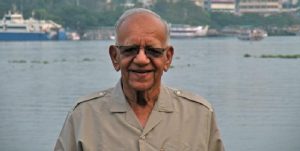 Former Tamil Nadu Director General of Police V.R. Lakshminarayanan, one of the most distinguished IPS officers in the country, died in Chennai at the age of 91. He was the brother of famed jurist Justice V.R. Krishna Iyer. A 1951 batch IPS officer, he had started his career as Assistant Superintendent of Police in Madurai.

As Joint Director of the Central Bureau of Investigation (CBI), soon after the Emergency had ended, on the orders of the Morarji Desai government, Mr. Lakshminarayanan had arrested former Prime Minister Indira Gandhi. According to the late police officer’s son Suresh Lakshminarayanan, his father had graduated in Physics from Madras Christian College in 1945 and then opted for the police service as his (Lakshminarayanan’s) father and brother were into the judiciary. In 1951, he underwent police training at Mount Abu.