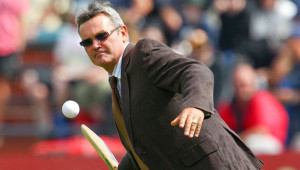 Martin Crowe, the legendary cricketer from from New Zealand, has passed away due to cancer at the age of 53. Crowe was first diagnosed with aggressive follicular lymphoma in 2012 and after chemotherapy, he was thought to be in remission. But Crowe announced in September 2014 that the cancer, which he called “my friend and tough taskmaster,” had returned.

Crowe captained the Kiwis in 16 Test matches and his highest score was 299 against Sri Lanka in Wellington in 1991. Named one of Wisden’s Cricketers of the Year in 1985, he was player of the tournament at the 1992 World Cup, scoring 456 runs in nine matches. He retired in 1996 with a knee injury and went on to become a television commentator and author.

Crowe played 77 tests and 143 one-day internationals for New Zealand in a 13-year career. He scored 5,444 test runs at an average of 45.36 with 17 centuries. Crowe was the son of a first-class cricketer – his father Dave played a handful of matches for New Zealand’s Canterbury province and had high ambitions for sons Jeff and Martin to surpass his achievements.