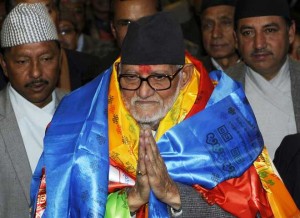 Former Prime Minister of Nepal and Nepali Congress President Sushil Koirala passed away due to Pneumonia at the age of 79. Koirala, who was elected Prime Minister of Nepal on February 10, 2014, died at his residence in Maharajgunj in the outskirt of capital Kathmandu. He had returned from the U.S. after undergoing a successful treatment for the lung cancer and is credited with promulgating the new constitution of Nepal in September last year.

Koirala was suffering from Chronic Obstructive Pulmonary Disease (COPD) and he succumbed to the disease. Born in Banaras, India, Koirala entered politics in 1954 and was in political exile in India for 16 years following the royal takeover of 1960. He also spent three years in Indian prisons for his involvement in a plane hijacking in 1973.

Koirala was a key figure in adoption of Nepal’s new constitution last September. After ethnic Madhesis later blocked border points with India and imposed a general strike in south Nepal to protest against the constitution, Koirala attempted to resolve the issue by negotiating with the protesters.

Koirala spent his life in politics fighting for democracy in Nepal and led protests in 2006 that ended a centuries—old monarchy system and turned Nepal into a republic.