Facts about Gujarat – Gujarat is a state in Western India, sometimes referred to as the Jewel of Western India. Gujarat is home to the Gujarati-speaking people of India. The state encompasses some sites of the ancient Indus Valley Civilization, such as Lothal and Dholavira. Lothal is believed to be one of the world’s first seaports. Historically, the state of Gujarat has been one of the main centres of theIndus Valley Civilization. It contains some ancient metropolitan cities from the Indus Valley such as Lothal, Dholavira, and Gola Dhoro. The ancient city of Lothal was where India’s first port was established. 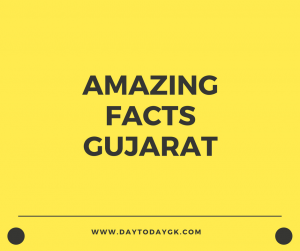 Some Famous Personalities from Gujarat

Gujarat is tagged as “Dry State”. It has a law in force that prohibits the manufacture, sale and consumption of alcohol within the state boundaries. The Bombay Prohibition Act was enforced on demise of Mahatma Gandhi in 1949 in Bombay state (Gujarat+Maharashtra). When Gujarat and Maharashtra was bifurcated in 1960, Bombay Prohibition Act was enforced in both the states. Maharashtra issues licenses for distribution and sale of alcoholic beverages but in Gujarat law is still in effect. That’s why Gujarat is Dry state. Along with Gujarat, Nagaland, Mizoram, parts of Manipur and union territory Lakshadweep are also dry states.