Home » Articles » Everything You Need to know about Jhansi Rani

jhansi ki Rani Laxmi Bai, the Rani of Jhansi was an Indian queen and warrior. She was one of the leaders of the Indian Rebellion of 1857 and became for Indian nationalists a symbol of resistance to the rule of the British East India Company in India. 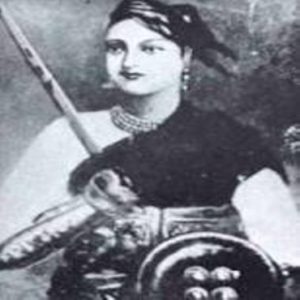 Originally named Manikarnika at birth nicknamed Manu, she was born on 19 November 1835 at Kashi Varanasi to a Maharashtrian Karhade Brahmin family from Dwadashi, District Satara. She lost her mother at the age of four. She was educated at home. Her father Moropant Tambey worked at the court of Peshwa Baji Rao II at Bithur and then travelled to the court of Raja Gangadhar Rao Newalkar, the Maharaja of Jhansi when Manu was thirteen years old. She was married to Gangadhar Rao, the Raja of Jhansi, at the age of 14. After her marriage Manikarnika became Lakshmibai, so named in honour of the goddess Lakshmi.

Because of her father’s influence at court, Rani Lakshmi Bai had more independence than most women, who were normally restricted to the zenana: she studied self-defence, horsemanship, archery, and even formed her own army out of her female friends at court.

Rani Lakshmi Bai gave birth to a son in 1851, however, this child died when he was about four months old. After the death of their son, the Raja and Rani of Jhansi adopted Damodar Rao. However, it is said that her husband the Raja never recovered from his son’s death, and he died on 21 November 1853 of a broken heart.

During that period, Lord Dalhousie was the Governor General of British India. The adopted child was named Damodar Rao. As per the Hindu tradition, he was their legal heir. However, the British rulers refused to accept him as the legal heir. As per the Doctrine of Lapse, Lord Dalhousie decided to seize the state of Jhansi. Rani Lakshmibai went to a British lawyer and consulted him. Thereafter, she filed an appeal for the hearing of her case in London. But, her plea was rejected. The British authorities confiscated the state jewels. Also, an order was passed asking the Rani to leave Jhansi fort and move to the Rani Mahal in Jhansi. Laxmibai was firm about protecting the state of Jhansi.

The Britishers attacked Jhansi in March 1858. Rani Jhansi with her faithful warriors decided not to surrender. The fighting continued for about two weeks. Shelling on Jhansi was very fierce. In the Jhansi army, women were also carrying ammunition and were supplying food to the soldiers. Rani Lakshmi Bai was very active. She herself was inspecting the defence of the city. However, after this great war, Jhansi fell to the British forces.

The British army entered the Jhansi City. Rani Lakshmi Bai, still full of courage and deathless patriotism dressed as a man, took up arms, her son Damodar Rao was strapped tightly to her back. She was holding the reins of her horse in her mouth. In the fierce fighting, she was using the sword with both her hands. When the situation was not in control, Rani of Jhansi with some of her warriors departed from Jhansi.

Rani Lakshmi Bai reached Kalpi. Many other rebellions force joined her. Tatia Tope from Kalpi was also one of them, from Kalpi Rani departed to the Gwalior. Again a fierce battle took place. Rani Jhansi fought with deathless patriotism and martyrdom. However, on the second day of fighting, the great heroine of the first struggle for India freedom, at the age of 23 years, lost her life. That unfortunate day was 18th June of 1858.