Agni-V is an intercontinental ballistic missile developed by the Defence Research and Development Organisation (DRDO) of India. Agni V is part of the Agni series of missiles, one of the missile systems under the original Integrated Guided Missile Development Program.

According to DRDO chief, the exact range of Agni V is “classified” or “understated” but afterwards he described Agni V as a missile with a range of 5,500–5,800 km. The Chinese reports claim the missile has a range of around 8,000 kilometres (5,000 mi). 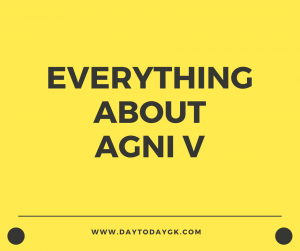 India has conducted successful test of the nuclear-capable long-range surface to surface ballistic missile, Agni-V.  The missile is indigenously designed and developed by state-owned Defence Research and Development Organisation.

The missile was designed to be easy to transport by road through the utilisation of a canister-launch missile system which is distinct from those of the earlier Agni missiles.  Agni-V would also carry MIRV (multiple independently targetable re-entry vehicles) payloads being concurrently developed. A single MIRV equipped missile can deliver multiple warheads at different targets.

On 19 April 2012 at 08.05 am, the Agni V was successfully test-fired by DRDO from Wheeler Island off the coast of Orissa. The test launch was made from the Launch Complex 4 of the Integrated Test Range (ITR) at Wheeler Island using a rail mobile launcher. The missile re-entry vehicle subsequently impacted the pre-designated target point more than 5,000 kilometres (3,100 mi) away in the Indian Ocean.

On September 15, 2013 India conducted a second test flight of Agni-V from the Wheeler Island off Odisha coast. The missile was test-fired from a mobile launcher from Launch Complex 4 of the Integrated Test Range (ITR) at about 8:50 am. The flight duration was little over 20 minutes and hit the pre-designed target in the Indian Ocean with an accuracy of a few metres.

On 31 January 2015, India conducted a third successful test flight of the Agni-V from the Wheeler Island facility. The test used a canisterised version of the missile, mounted over a Tata truck . The Integrated Test Range Director, M. V. K. V. Prasad, said: “The missile, witnessed a flawless ‘auto launch’ and detailed results will be known after all data is retrieved from different radars and network systems.”

The bouquet of Agni-I, Agni-II, Agni-III, Agni-IV and Agni-V form the bulwark of India’s nuclear deterrence programme. All of them can carry nuclear warheads. While Agni-I has a range of 700 km, Agni-II can take out targets 2,000 km away, Agni-III can travel 3,000 km and Agni-IV 4,000 km. The Army has already deployed these four missiles. Prithvi-II too can carry nuclear warheads.