Download PDF Link available at the bottom of the page

What is a Budget?

Budgeting is the process of creating a plan to spend your money. This spending plan is called a budget. Creating this spending plan allows you to determine in advance whether you will have enough money to do the things you need to do or would like to do.

The Union Budget of India also referred to as the Annual financial statement in the Article 112 of the Constitution of India, is the annual budget of the Republic of India. The Government presents it on the first day of February so that it could be materialized before the commencement of new financial year in April.

The first Union budget of independent India was presented by R. K. Shanmukham Chetty on November 26, 1947.

Budget at a Glance shows Budget Estimates in broad aggregates to facilitate easy understanding. The document shows receipts and expenditure as well as the Fiscal Deficit (FD), Revenue Deficit (RD), Effective Revenue Deficit (ERD), and the Primary Deficit (PD). The document gives an illustrative account of sources of receipts, and their application through suitable charts, and graphs. In addition, the document contains the resource transfer to States and allocations on major programmes and schemes.

Fiscal Deficit is the difference between the Revenue Receipts plus Non-debt Capital Receipts (NDCR) and the total expenditure. This indicates the total borrowing requirements of Government from all sources.

Revenue Deficit refers to the excess of revenue expenditure over revenue receipts. 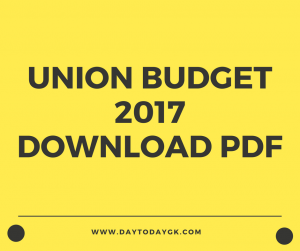 THE POOR AND THE UNDERPRIVILEGED