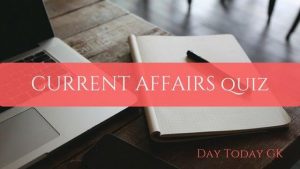 Vyas is a qualified chartered accountant and had been working as the Managing Director of Shree Mahila Sewa Sahakari Bank, Ahmedabad, since 1986. She played a pivotal role in the launching of first financial literacy programme in Sewa Bank in 2001.


Click here to View Answer
Answer d)Kumar Sangakkara. Former Sri Lanka captain Kumar Sangakkara has been appointed as the first non-British president of the Marylebone Cricket Club. Other illustrious cricketers from the past who have taken on the role of MCC president include Ted Dexter, Derek Underwood, Mike Brearley, Colin Cowdrey, Mike Gatting and Gubby Allen – all legends of English cricket. Sangakkara will be the first overseas MCC president in the organization’s 233-year history.


Click here to View Answer
Answer a)Rs1.13 trillion.Revenue from goods and services tax (GST) witnessed 10% growth from the year-ago period at ₹1.13 trillion in April, the highest ever since the implementation of the indirect tax system on 1 July 2017, the finance ministry said

Flagging off the ‘Rani Abbakka Force’ in Mangaluru , Sandeep Patil, Commissioner of Police, said the Karnataka police is giving utmost importance to the protection of women and children.

The rifle ace from Jaipur is among the five Indian shooters to have already secured 2020 Olympics quotas for the country.


Click here to View Answer
Answer b)Chandrayan-2.After being deferred several times in last one year, India’s second mission to the moon – Chandrayaan 2 is now all set to be launched in July.

The Indian Space Research Organization (ISRO) which had initially planned to launch the mission last year in April, confirmed that the all the modules for the mission would be ready in the next two months.

It would be launched from Satish Dhawan Space Centre in Sriharikota in Andhra Pradesh.


Click here to View Answer
Answer d)Iraq. Iraq has, for the second year in a row, become India’s top crude oil supplier, meeting more than a fifth of the country’s oil needs in 2018-19 fiscal year.

According to data sourced from the Directorate General of Commercial Intelligence and Statistics, Iraq sold 46.61 million tonnes (mt) of crude oil to India during April 2018 and March 2019, 2% more than 45.74 mt it had supplied in 2017-18 fiscal.


Click here to View Answer
Answer c)Hirannaiah . Noted Kannada theatre personality Master Hirannaiah died in the city on May 2 morning. He was 85 years old and was suffering from a liver complication.


Click here to View Answer
Answer c)Rapper Drake.Rapper Drake set a record with the most wins ever, taking home 12 honours at the Billboard Music Awards. The ceremony took place on Wednesday night at the MGM Grand Garden Arena here with singer Kelly Clarkson as the host.