The Ministry of Health & Family Welfare commemorated the World TB Day (24th MARCH )with a function to mark the occasion, and reiterated the commitment to eliminating TB in the country by 2025.
Various presentations made at the event highlighted the key changes introduced in the policy landscape of TB in the country. India is now closest ever to covering all TB cases with 21.5 lakh new TB patients notified in 2018. With the aim of universal access to free diagnostics and treatment services, path breaking policy changes have been introduced.

The theme of World Tuberculosis Day 2019 is “It’s Time”

As the twelfth edition of the Indian Premier League (IPL) came calling with a scintillating contest between Chennai Super Kings (CSK) and Royal Challengers Bangalore (RCB), the cricket fans geared up for multiple individual clashes that the opening match had to offer.

Despite a warning by United States, Italy joined China’s signature foreign policy Belt and Road initiative (BRI), making it the first G7 country to officially do so reports Xinhua.

India on April 1 will launch an electronic intelligence satellite Emisat for the Defence Research Development Organisation (DRDO) along with 28 third party satellites and also demonstrate its new technologies like three different orbits with a new variant of PSLV rocket, ISRO said .

According to Indian Space Research Organisation (ISRO), a new variant of its Polar Satellite Launch Vehicle (PSLV) rocket will first put the 436 kg Emisat into a 749 km orbit.

After that, the rocket will be brought down to put into orbit the 28 satellites at an altitude of 504 km.

The bonds with a face value of Rs 10 lakh each bears a coupon rate of 9.45 per cent per annum payable annually with call option after 5 years or any anniversary date thereafter.

Founded in 2008, Aujas has operations in India, the Middle East and North America. It employs about 400 cybersecurity professionals and has over 390 customers globally. The service portfolio includes information risk advisory, identity & access management, threat management and security analytics.

7. Canara Bank issues bonds from London branch to raise up to USD 400 mn

State-owned Canara Bank has launched a bond issuance programme through its London branch to raise up to USD 400 million (about Rs 2,750 crore). The bonds are set to mature on March 28, 2024.

Canara Bank said the bonds are priced at 5-year US Treasury plus 170 basis points carrying a coupon of 3.875 per cent fixed payable half yearly. The bonds will be listed on the Singapore Stock Exchange.

The nation capital’s Indira Gandhi International Airport (IGIA) has now become the world’s 12th busiest airport, moving up four places from the 16th spot in 2017. According to the preliminary world airport traffic rankings for 2018 released by the Airports Council International (ACI) , it over took mega-hubs like Frankfurt, Dallas Forth Worth, Guangzhou and Istanbul Ataturk airports. The four airports above the IGI Airport are Amsterdam Schiphol, Paris-Charles de Gaulle, Shanghai Pudong and Hong Kong, managing over 46 lakh passengers more than IGIA. 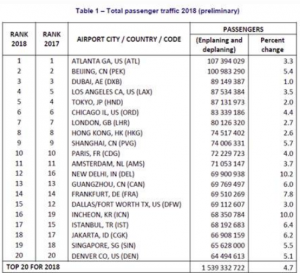