An image of a 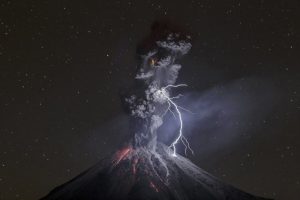 volcano struck by lightning has beaten photographs of crocodiles, dervishes and surfers to win this year’s grand prize.

This image by Sergio Tapiro Velasco has won the 2017 National Geographic Travel Photographer of the Year contest.

He has been photographing Mexico’s Colima volcano for more than a decade. To take this image, he carefully tracked increases in its activity.

Chawla had last month resigned from Future Consumer, a part of Kishore Biyani-led Future Group, where he was the CEO.

Cricketer Harmanpreet Kaur, whose stellar innings against Australia steered India into the ICC Women’s World Cup final, may soon don khaki as the Punjab government has initiated the process of inducting her asa DSP in the state police.

She got a cash prize of Rs5 lakh cheque. Chief Minister Amarinder Singh directed the state Director General of Police (DGP)Suresh Arora to complete the necessary formalities for her appointment.

The Haryana government has barred school teachers from stepping inside the classrooms with mobile phones and decided to hold head of the school “accountable” for violation of this norm.

There are about 25 lakh students in the government-run schools, from primary to plus two, across the state, while over 90,000 teachers are posted in these schools.

Maharashtra Government launched two online portals MahaDBT and MahaVASTU to streamline the process of direct benefit transfer (DBT). It is the first state in the country to launch such a system that will provide direct benefits with Aadhaar authentication.

MahaDBT portal: It is an Aadhaar-authenticated electronic mechanism that will enable direct transfer of benefits for over 40 schemes currently implemented.

MahaVASTU portal: It is an online building permission management system, through which construction approvals will be sanctioned with full transparency.

A bill to enable exit of RBI from NABARD and increase authorised capital of the development institution six times to Rs 30,000 crore was passed by the Lok Sabha.

The National Bank for Agriculture and Rural Development (Amendment) Bill, 2017 also seeks to amend certain clauses in the light of reference of the Micro, Small and Medium Enterprises (MSMEs) Development Act, 2006 in the proposed legislation.

The Lok Sabha has gave its nod for a Bill to replace the NPA Ordinance promulgated on May 7 this year.

The tribunal has instructed the companies to hold a meeting of equity shareholders and unsecured creditors.

The Sunil Bharti Mittal-led company had announced in February that it would acquire the businessof Telenor India for an undisclosed sum.

Airtel covers its spectrum in all seven circles namely Andhra Pradesh, Bihar, Maharashtra, Gujarat, UP (East), UP (West) and Assam.

After Grofers and Amazon India, online grocery firm BigBasket has received the government’s nod for foreign direct investment to undertake retailing of food products, which are manufactured or produced in India, Hari Menon, co-founder and CEO.

The start-up, which applied for FDI in September last year, will have to spin off a new entity to start this business since 100% FDI is only applicable for food products manufactured or produced in India, whereas currently BigBasket sells other household products such as soap, shampoos etc through its e-commerce channel.

The Indian Army has developed a mobile application through which serving soldiers can track details like postings and promotions.

Through the ‘Humraaz’ app, soldiers can also view their monthly salary slips and the Form 16 and also download them.

The mobile app has been developed in-house by the Army and will be launched in the second week of August for prompt communication of information to junior commissioner officers and other personnels.

Iran’s President Hassan Rouhani was officially sworn in for a second term at a ceremony overseen by supreme leader Ayatollah Ali Khamanei.

As per Iran’s Election Law, a President Elect is required to get the Leader’s approval before being sworn-in before the Parliament.

Rouhani won the re-election in May 2017, after securing 57% of the votes.  He defeated his main contender Ebrahim Raeisi.

Gulf Arab countries have a high number of expatriate workers but do not allow naturalisation of foreigners, except in rare cases.

A ban on travel by U.S. passport holders to North Korea will take effect on Sept. 1 and Americans in the country should leave before that date, the U.S. State Department.

U.S. citizens wishing to travel to North Korea would have to obtain a special validation for their passports, which would only be granted in limited circumstances.

Qatar’s Cabinet approved a draft law making permanent residency available to some non-citizens of the country.

Under the new law, Residency permits will be granted to children of Qatari women married to foreigners.

Gulf Arab countries have a high number of expatriate workers but do not allow naturalization of foreigners except in rare cases.

India’s Manju Kumari won the bronze medal with a 2-0 victory over Ilona Prokopevniuk of Ukraine in the Junior World Wrestling Championship in Tampere, Finland.