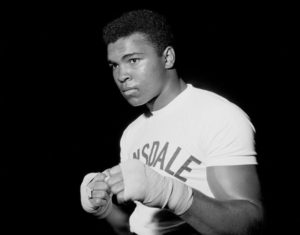 Muhammad Ali, the silver-tongued boxer and civil rights champion who famously proclaimed himself “The Greatest” and then spent a lifetime living up to the billing, is dead. Ali died at a Phoenix-area hospital, where he had spent the past few days being treated for respiratory complications. Ali’s funeral will take place in his hometown of Louisville, Kentucky.  After a 32-year battle with Parkinson’s disease, Muhammad Ali has passed away at the age of 74. Ali had suffered for three decades from Parkinson’s, a progressive neurological condition that slowly robbed him of both his verbal grace and his physical dexterity.

Born Cassius Marcellus Clay on Jan. 17, 1942 in Louisville, Kentucky, to middle-class parents, Ali started boxing when he was 12, winning Golden Gloves titles before heading to the 1960 Olympics in Rome, where he won a gold medal as a light heavyweight.

Ali successfully defended his title until 1978, when he was beaten by a young Leon Spinks, and then quickly took it back. He retired in 1979, when he was 37, but, seeking to replenish his dwindling personal fortune, returned in 1980 for a title match against Larry Holmes, which he lost. Ali lost again, to Trevor Berbick, the following year. Finally, Ali retired for good.

In 2005, President George W. Bush honored Ali with the Presidential Medal of Freedom, and his hometown of Louisville opened the Muhammad Ali Center, chronicling his life but also as a forum for promoting tolerance and respect.