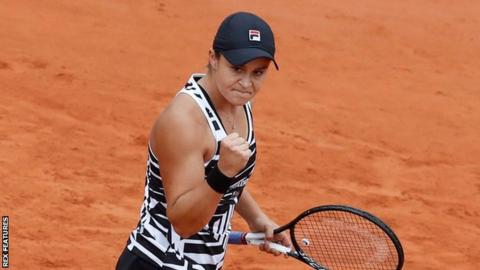 Australian Ashleigh Barty has beaten Czech teenager Marketa Vondrousova in the French Open final to win her first Grand Slam singles title and complete a fairytale return to the sport. The eighth seed won 6-1 6-3 against 19-year-old Vondrousova on the Paris clay. Barty, 23, quit tennis to play professional cricket in 2014, but returned to the sport 17 months later. Now she is the first Australian to win a singles titles at Roland Garros since Margaret Court in 1973.

Barty’s first Grand Slam singles title comes almost three years to the day since she reappeared in the WTA rankings – at 623rd – after taking more than a year out to switch sports. The Queenslander retired in 2014 and played for the Brisbane Heat in the women’s Big Bash after saying tennis was a “lonely sport”. She decided to return in early 2016 and has since won four tour titles – including the Miami Open in March – as well as the US Open women’s doubles title last year.