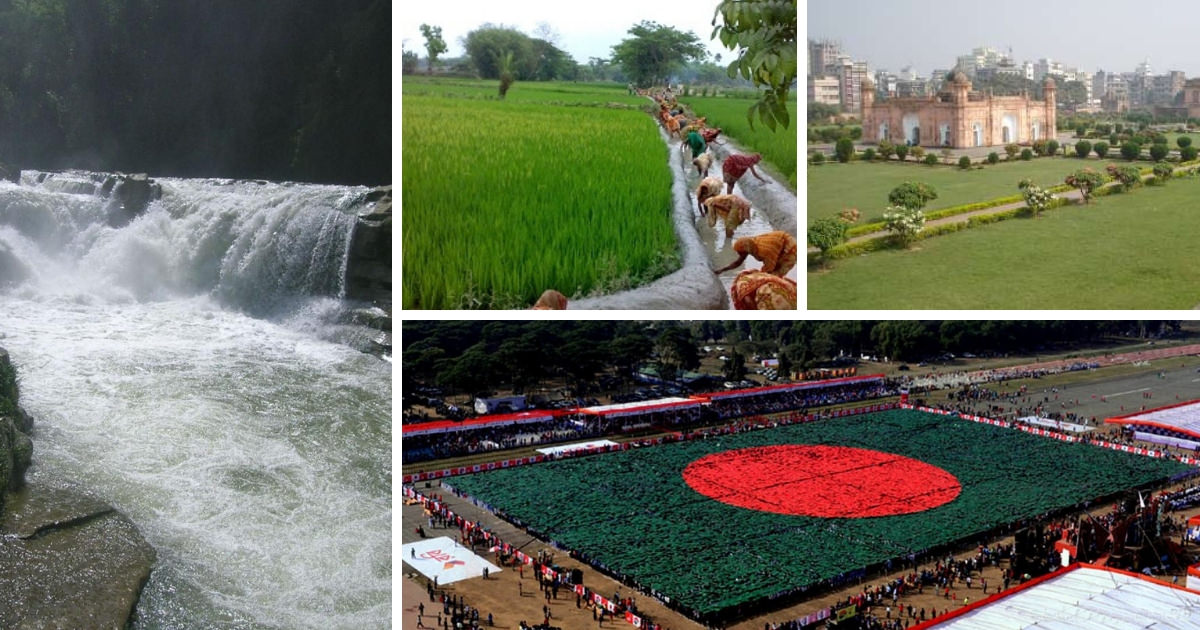 The flag of Bangladesh consists of a red disc on top of a green field. The red disc represents the sun rising over Bengal, and also the blood of those who died for the independence of Bangladesh. The green field stands for the lushness of the land of Bangladesh.

Bangladeshis include people of different ethnic groups and religions. Bengalis, who speak the official Bengali language, make up 98% of the population. English is also spoken. The politically dominant Bengali Muslims make the nation the world’s third largest Muslim-majority country.

Among Bangladeshi Muslims, 96% are Sunni, over 3% are Shi’a, and a fraction of 1% are Ahmadiyyas. Hindus are the largest minority religion in Bangladesh, at 10.5% of the population.

Bangladesh is a founding member of SAARC, BIMSTEC, the Bangladesh-China-India-Myanmar Forum for Regional Cooperation and the Bangladesh Bhutan India Nepal Initiative. It is also a member of the Commonwealth of Nations, the Developing 8 Countries, the OIC, the Non-Aligned Movement, the Group of 77 and the World Trade Organization.

Supported by India, East Pakistan became Bangladesh in 1971 after a war of independence against Pakistan. Bangladesh has the third largest Muslim population in the world after Indonesia and Pakistan. Lasting for nine months, the entire war ended with the surrender of Pakistan’s military to the Bangladesh-India Allied Forces on 16 December 1971.

Bangladesh is sometimes called “the playground of seasons” because it has six – not four – separate seasons, which it calls Grismo (summer), Barsha (rainy), Sharat (autumn), hemanto (cool), sheet (winter), and bashonto (spring). Bangladesh suffers regularly from substantial flooding caused by monsoon rains and melting snows from the Himalayas. Bangladesh has a tropical climate with hot and humid summers (March to June).

Bangladesh has one of the largest coastal mangrove forests in the world; it forms part of the Sundarbans National Park, a World Heritage site.

Cricket is the most popular sport in the country. In 1999, its national cricket team was part of the World Cup, and in 2000, it received Test status, an honour in the sport for it is the ultimate test of a team’s ability and endurance.

Bangladesh ratified the Rio Convention on Biological Diversity on 3 May 1994. The country is dominated by lush vegetation, with villages often buried in groves of mango, jackfruit, bamboo, betel nut, coconut and date palm. The country has 50 wildlife sanctuaries.

The government has designated several regions as Ecologically Critical Areas, including wetlands, forests, and rivers. The Sundarbans Tiger Project and the Bangladesh Bear Project are among the key initiatives to strengthen conservation.

Some other facts about Bangladesh