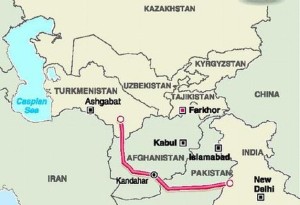 Afghanistan will raise a 7,000-member security force to guard the Turkmenistan-Afghanistan-Pakistan-India (TAPI) gas pipeline project. Afghan Mines and Petroleum Minister Daud Shah Saba told the country’s Upper House of Parliament that the force will provide security during the implementation of the project and demining the route of the pipeline. Construction of the $10 billion TAPI pipeline began earlier this December some 25 years after the inception of the project. The pipeline is to be completed by December 2019.

Overall, the pipeline will stretch 1,800 kilometres and is likely to cost more than $10 billion. It will use the latest technology, with a General Valve Twin Seal being considered for each section to help control the flow of gas and reduce leaks. Ultimately, the TAPI project could help ease growing energy deficits in Asian giants Pakistan and India. For Turkmenistan, which has been hit by low energy prices and dependence on China for the vast majority of its gas sales, TAPI is a key opportunity to diversify its exports.

The project is politically complex, requiring cooperating governments, and logistically challenging, as the pipeline would pass through areas of Afghanistan and Pakistan plagued by Taliban and separatist insurgents.

India and Pakistan can look forward to meeting some of their energy demands through gas from this pipeline, which promises to be a major confidence-building measure for the region. State-owned Gas Authority of India or GAIL, Indian partner for the project, will own a 5% stake in the pipeline.