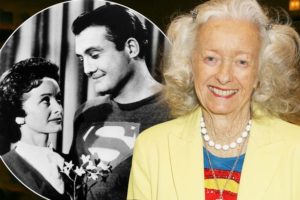 Noel Neill, the first actress to play Superman’s love interest, passed away at the age of 95. Neill was born in Minneapolis, Minnesota in 1920, the daughter of Minneapolis Star Tribune news editor David Neill and the New York vaudeville performer LaVere Neill.  As a teenager, she became a highly sought-after photographic model and her pin-up was reportedly second only to Betty Grable’s in terms of popularity among American serviceman during World War II.

Mostly appearing in non-speaking roles initially, Neill featured in several short films, but soon gained leading lady status with a starring role in William Nigh’s romance Are These Our Parents? in 1944. She also landed a recurring role as high school newspaper reporter Betty Rogers in The Teenagers musical series, as well as featuring in a series of film and TV westerns for notable directors such as Vincent Minnelli, Cecil B. DeMille and Hal Roach.

In total, Neill made close to 100 films in her long and incredible career, but it was her role as Lois Lane in the 1948 movie serial Superman that showed her talent for humor. Following on from the success of the 15-part film serial, two years later, she appeared in the sequel Atom Man vs Superman, with Kirk Alyn portraying Superman/Clark Kent once more. However, it was the 1950 television series Adventures of Superman, starring George Reeves, which cemented her legacy as the intrepid reporter.